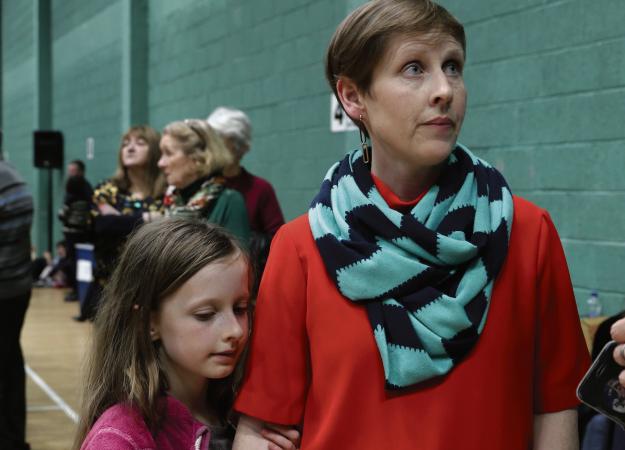 Pauline O’Reilly’s biggest supporter, her daughter Caragh, cuddled into the Green Party councillor’s side as she gave an interview to the Galway City Tribune at the count centre on Sunday, after being eliminated on the sixth count in Galway West.

The nine-year-old was by her mother’s side last May as well, when Cllr O’Reilly – and two other Galway councillors, Martina O’Connor and Alastair McKinstry – was elected in the local elections on the back of a ‘Green wave’.

Less than a year later, and ger Dáil bid came unstuck by another green wave – green of a Republican tinge.

She was tipped by many political pundits and rival candidates, as the likely beneficiary if Galway West returned two ‘left’ seats. And a TG4 constituency poll the week before voters cast their ballots, confirmed Cllr O’Reilly was bang in contention. But then came the surge for Sinn Féin, which her supporters felt on the doorsteps.

“We knew a week out that I was in trouble; I felt in the last couple of days support had shifted back a bit. I wasn’t shocked when I saw the tallies because I was feeling the worry a week ago and I knew it hadn’t come back sufficiently. Certainly, a lot of younger people, children and teens, were upset at the lack of conversation about climate and the environment but it just wasn’t coming up strongly enough with adults,” she said.

Cllr O’Reilly took 6% of the vote with 3,650 first preferences, an increase of 3.5% compared with Seamus Sheridan in 2016, but she was swamped by Sinn Féin’s rise.